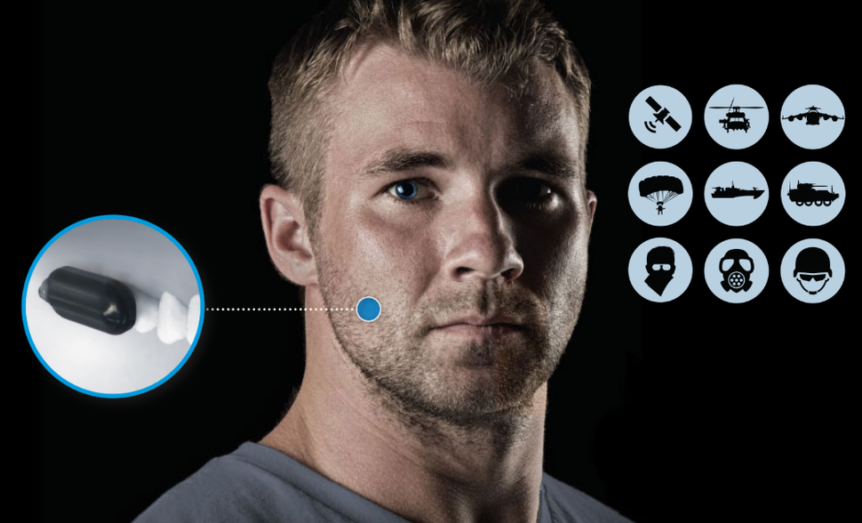 Hearing strange voices inside your head is typically cause for alarm. But it could become a lifesaving reality for soldiers in the very near future.

For military members, one of the disadvantages to using handheld radios in the field is their lack of security — even if the signal sent through a two-way radio is protected from hacking through encryption, keeping the broadcast quiet enough not to arouse attention can be a challenge. But what if there was a wireless radio so tiny it could detect your voice at a whisper level and respond inside your head?

Once a Hearing Aid, Now a Molar Mic

The U.S. Department of Defense recently partnered with Sonitus, a Silicon Valley startup, to customize its first-ever internal radio for military use. The DoD awarded Sonitus, which primarily manufactures hearing aids, a $10 million contract for certain military-grade modifications to an amazing two-way radio nicknamed the “molar mic.”

The molar mic clips to a user’s tooth and sends sound waves straight to the auditory nerves in their inner ear and brain, bypassing their outer ear entirely. As if this internal radio weren’t already secure enough, the signal it transmits is encrypted, ensuring that no one can hear a molar mic conversation but the person on each end.

It’s no wonder the DoD is interested in this technology—the ability to communicate nearly telepathically (and silently) with others can provide nearly infinite advantages on the battlefield, in domestic terrorism situations, and when helping rescue residents from natural disasters.

Once Sonitus has finished these modifications, it’ll continue to develop its molar mic for commercial sale and use.

The molar mic is just the latest of many projects and products funded by the Pentagon’s most tech-savvy branch, the Defense Innovation Unit (DIU). This team of technology scouts looks to the private sector for ideas and inspiration on ways to combat the increasing cybersecurity and weapons-related threats posed by other world superpowers like China and Russia. In the first two years since its 2015 inception, DIU issued more than $100 million in contracts.

By working directly with the companies that have designed and created these unique products, then adapting these products to fit military needs, the DIU can completely bypass the bureaucratic process that’s usually used to create other military technology. The federal government often isn’t the most efficient body to work on research and development, so paying for these products after the fact in lieu of sponsoring their development is often the most cost-effective option.