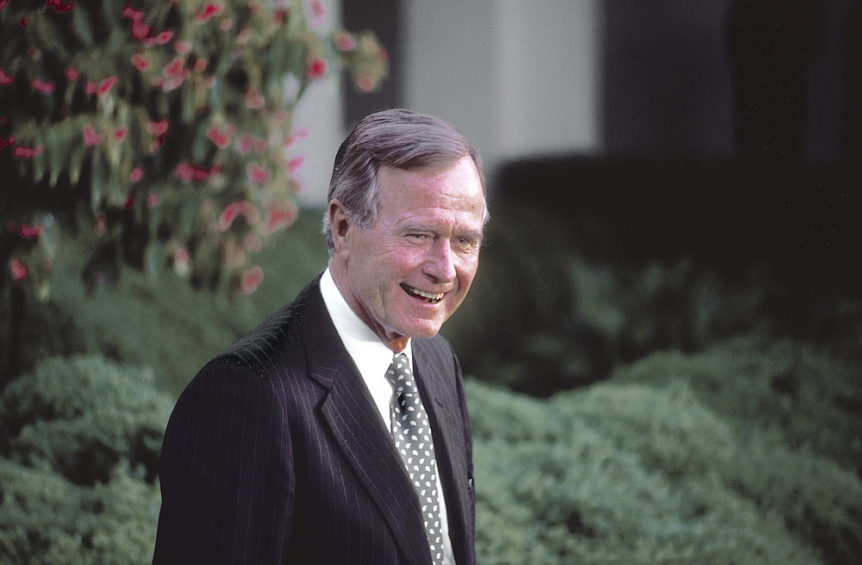 The United States last week laid to rest its last surviving presidential war hero — President George Herbert Walker Bush. One of the Navy’s youngest fighter pilots, Bush was shot down about 700 miles south of Japan during World War II. Of the nine young men who wound up in the Pacific after this attack, Bush was the only one to survive.

As the 41st U.S. President, George H.W. Bush condemned China for the Tiananmen Square massacres, saw the fall of the Berlin Wall, and initiated U.S. involvement in the Persian Gulf War. Read on to learn more about President George H.W. Bush’s military legacy.

In 1989, the first year of Bush’s presidency, China’s People’s Liberation Army (PLA) mowed down between 700 and 2,700 peaceful democratic protestors who had camped out in Beijing’s Tiananmen Square. One of the most famous photographs of history was generated during this event—even today, the visual of a single protestor bravely standing before a hulking military tank has become a symbol of the fight for democracy.

This violent insurrection quickly drew public outrage across the globe, and on behalf of the U.S., President Bush suspended the sale of all weapons to China as punishment for its government’s actions.

In 1989, the U.S. indicted Panamanian military dictator Manuel Noriega on drug trafficking charges for his role in the crack-cocaine epidemic that had been ravaging U.S. cities for nearly a decade. Noriega was accused of helping ship large quantities of South American cocaine to the U.S. and offering up Panama’s banks as a safe haven for drug proceeds.

Although Iraqi dictator Saddam Hussein would not be captured and executed until George H.W. Bush’s son became president, President Bush took a strong stand toward Hussein’s hostile invasion of Kuwait in August 1990. “This will not stand,” declared Bush, “this aggression against Kuwait.” What followed was Operation Desert Storm, a massive air attack on Iraq that launched the Persian Gulf War.

The U.S. gained a number of unlikely allies in its efforts to remove Hussein from Kuwait, including both China and Russia. And with ally Israel deliberately abstaining from the military coalition, other Middle Eastern countries that were traditionally hostile to Israel were freer to join. The U.S. sent more than 500,000 ground troops to Kuwait during this time, and after enjoying quick success, the ground offensive was called off in February 1992—exactly 18 months after the Kuwait invasion.

With his decorated military background, George H.W. Bush had the experience and the wisdom to act as a guiding hand to the Department of Defense. Although he served as President for only four years, he presided over some of the most effective military campaigns in U.S. history.