Hurricane Michael, the third most powerful Atlantic storm to strike the United States in recorded history, caused unprecedented damage to the Florida panhandle and other southern areas earlier this month, claiming the lives of at least 36 Americans and causing more than $8 billion in damages.

According to CNN, officials in four states — Florida, Georgia, North Carolina, and Virginia — have each confirmed people died as a result of the storm.

Our hearts go out to the families of the victims and we want to extend a special thanks to the Army Corps of Engineers for all its hard work in the wake of the tragic storm. 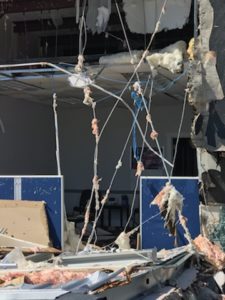 One of the buildings seriously damaged by the storm was the Air Force Reserve Recruiting office in Panama City, Florida. While the building (pictured) sustained significant damage, the RRDS ballistic panels, which were installed as a first-line defense against potential active shooters, were still standing after the storm.

Hurricane Michael ravaged the Florida Panhandle and wrought havoc on a number of southern states, including Georgia, South Carolina, and North Carolina. The storm made landfall on the Florida panhandle on Oct. 10, 2018.

The Category 4 hurricane recorded wind gusts of up to 129 miles-per-hour and caused extensive flooding throughout the southern United States, Mexico, and Cuba.

On October 9 – a day before Hurricane Michael made landfall – President Donald Trump signed an emergency declaration for Florida, which authorized the Federal Emergency Management Agency (FEMA) to coordinate disaster efforts, with Thomas McCool serving as Federal Coordinating Officer in the state. The declaration also authorized funding for 75% of the cost of emergency protective measures and the removal of storm debris in 14 Florida counties.